IMMUNOBIOLOGY: THE HUMAN GENOME & HEALTH, THE BRAIN, FOOD AND ENVIRONMENT

Our health is tied to our genes, inherited from our parents and their parents and their parents. However, our lifestyles dictate what we do to the products of our genes and how we change the normal healthy behavior of genes. There is a new and growing understanding among scientists that the environment around our genes could be changed by food, and toxic agents – a field called epigenetics. The region between the genes, long known as “junk DNA” and discarded by the most industrious scientists in their search for genetic mutations that control disease, are turning out to be more in control of our health. Problem is that scientists are just beginning to learn about this new field, and cannot figure out yet, how the science of the region between the genes might be mastered. It is large stretches of non-gene waiting to be explored and understood.  Yet, they might hold the clue to many a mystery of emerging diseases; probably a product of the industrial revolution to feed and clothe an unstoppable growing population on an earth with finite resources. 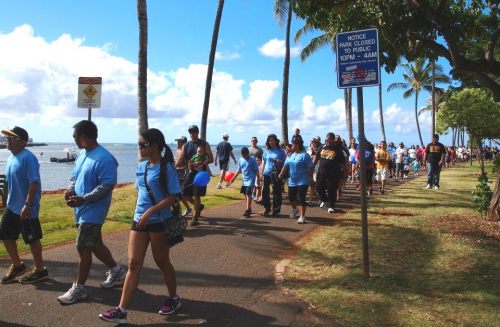 Ala Moana Beach Park in Honolulu on Saturday, April 21st, 2012 for the 7th annual Hawaii Walk Now for Autism Speaks

As for the role of environment, for the first time, scientists have realized that sunlight controls our innate immune health probably in a way somewhat similar to the way green plants need sunlight. Sunlight may reach our genetic pathways through mitochondria, which we inherit from our mothers – again, somewhat similar to green plants. The role of early morning sunlight exposure might hold the answer to fighting several diseases and optimal health. Is it possible that “early to rise and early to bed” should be heeded?

THE BIOLOGY OF EMERGING BRAIN DISORDERS

Autism – The New Disease: The uninformed and those who are ignorant are naturally unaware of Autism. It is, after all, a “new” disease, a “life style” effect of our modern society’s advanced choices. For those of you who have never witnessed or been in contact with an autistic child, I have selected a few videos here of how Autism in our children exists in our daily life in developed countries. As responsible community members, we have a role in ensuring the safety of all our children. The Autistic child is very healthy, but possesses a special neurologically and intestinally dictated condition. We have not discovered what this phenomenon or set of triggers that produce an autistic child is so far. We owe our Autistic children a decent, safe place in our community.

The Intestinal Hookworm and it’s role in human health

Autism spectrum disorders (ASD) are a genetically and phenotypically heterogeneous group of syndromes defined by fundamental impairments in social reciprocity and language development accompanied by highly restrictive interests and/or repetitive behaviors. Recent advances in genetics, genomics, developmental neurobiology, systems biology, monogenic neurodevelopment syndromes, and induced pluripotent stem cells (iPSC) are now offering remarkable insights into their etiologies and converging to provide a clear and immediate path forward from the bench to the bedside. You may want to click here to read about one parent’s search for genetic and support group answers for a child in the Autism spectrum. Chromosomes 18, 22 and a microdeletion at 16P11.2 are discussed with their implications.

In the journal Science, published on 14 September 2012, Yale University Neuroscientists, Dr Matthew W. State and Dr. Nenad Sestan give their perspective on the current scientific knowledge on this perplexing condition. They argue that researchers are now well positioned to unravel the pathology underlying autism spectrum disorders and to identify new and more personalized approaches to its treatment. You may read the original scientific article by clicking here.  This is a looming problem as this generation ages: Who will take care of them when they become adults? Their parents who currently take care of their needs – food, housing, transportation, and above all, friendships since they are extremely lonely, will be dead releasing their care to the kindness and foresight of policy makers.

Here are a few of Pursue Natural articles on the subject of Autism:

Comments and Any Questions Cancel reply